Walls surrounding Vatican City
But Vatican City is also a tourist magnet thanks to the presence of some of Rome's most popular attractions, including the St. Peter's Basilica and the Vatican Museums, home to the Sistine Chapel.

Usually referred to as a City State and often called "The Holy See", Vatican City is home to about 800 residents. None of them are permanent. The population of this tiny area, which surrounds St. Peter's Basilica, is made up of priests, nuns, guards, high-ranking dignitaries and, of course, the pope, and is constantly changing.

Inside the City State
Vatican City wasn't always this small. In the mid-19th century, the Papal States covered approximately 44,000 square km (17,000 sq mi). However, during the next decade and the struggle for Italian unification, the majority of these states officially became a part of the country of Italy.

The pope's power was abolished and the papal territory was confined to the Vatican. In 1929, the Treaty of Lateran gave The Holy See autonomy, officially establishing this tiny area that attracts millions of visitors each year. The city state is protected by its own military, the strangely-clad Swiss Guards.

St. Peter's Square
Guests enter Vatican City through expansive St. Peter's Square. The square was laid out by Bernini during the pontificates of Alexander VII and of Clement IX (1657-1667). Visitors to this magnificent square (which is actually an ellipse) are surrounded by two huge colonnades, with 284 Doric columns arranged in four rows, atop which stand 140 statues of saints.

In the center of the square, you'll find a 25.31-meter-tall (83 ft) Egyptian obelisk, brought to Rome by Caligula in 38 AD from Heliopolis, located on the Nile Delta. Fountains are situated on either side of the obelisk. The one sitting on the right was placed in this location by Bernini and was made by Carlo Maderno. The other was created by Carlo Fontana.

Thousands of guests gather in the square to hear blessings from the pope or to participate in masses, especially on religious holidays such as Christmas and Easter.

St. Peter's Basilica
St. Peter's Basilica, the crowning glory of Vatican City, is the most important church in the world. The cornerstone of this church was laid more than five hundred years ago, in 1506. The magnificent altars and monuments inside the church are too numerous to mention, but even those who aren't art aficionados will be wowed by what they'll find inside this amazing basilica, including more works by the renowned sculptor/architect Gian Lorenzo Bernini and also Michelangelo's Pietà.

The enormous dome of St. Peter's, another creation by Michelangelo, is accessed from an elevator to the roof. Once you've reached the top of the elevator, 323 additional steps take you to the best view of Rome from anywhere in the city.

Near the entrance of the basilica you will probably encounter some of the famous Swiss Guards. Since 1506 when pope Julius II invited Helvetian soldiers to join the small Vatican army, they have been the guards of the Vatican and the pope in particular. All entrants to the army must be Swiss, Catholic and they must take the oath of loyalty to the pope. This oath is taken May 26th, to commemorate the sacking of Rome on the same day in 1527 when Swiss guards protected pope Clement VII during his escape to Castel Sant'Angelo. Of the 189 guards, only 42 survived.

Governorate Palace
Vatican City is also home to the expansive Vatican Museums, which boasts one of the most impressive art collections in the world. Some of the most famous works of art on display here include the wall and ceiling paintings of the Sistine Chapel, the Stanze of Raphael, the Laocoön statue and the Apollo del Belvedere. A tour of the museums is a must for any visitor to Rome.

Finding Your Way Around

Vatican City is an amazing place, so you'll want to be sure you don't miss a thing. The Vatican has its own tourist office on the left side of the piazza which is a good place to begin your visit. Here you can book tours of Vatican City's gardens and purchase maps and other guide books for self-guided tours of the square, basilica, and museums.
By the way, rumor has it that the Vatican's postal system is better than that of the city of Rome, so be sure to mail your postcards there! 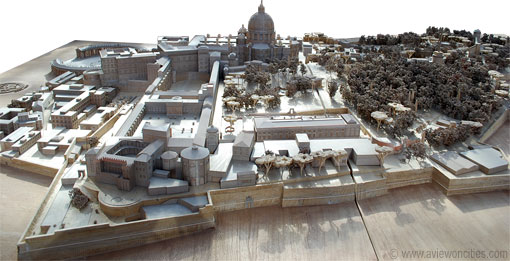