Rating
499 votes 499 votes
The Forum Romanum was the center of life in Imperial Rome, evidenced by the many remains of triumphal arches, temples and basilicas.

Forum Romanum seen from Capitol
Until 509 BC, when Rome became a republic, the city was reigned by an Etruscan dynasty of Tarquin Kings. They built a sewer, the 'Cloaca Maxima', to drain water from the marshlands of the valley between the Palatine, Capitoline and Esquiline hills to the Tiber river.

The Forum in
better days
From then on the area became a center of activity and it was the political heart of Rome until the fall of the Roman Empire more than one thousand years later. It was the site of the first forum. Here, triumphal processions took place, elections were held and the Senate assembled.

Today, the forum known as the Forum Romanum can look like a disorderly collection of ruins to the uninitiated, but with some imagination you can see the Roman Empire come back to life at this site. Remains of many buildings from different periods are visible; the forum was littered with temples, basilicas and triumphal arches.

Arch of Septimius Severus
Three triumphal arches were built on the forum. They were used by emperors to commemorate their victories.
Hardly any remains are left of the first one, constructed by Augustus in 29 BC.
The Arch of Titus, built in 81 AD, commemorates the victory in the Jewish War. It is located at the Via Sacra on the eastern side of the forum.
At the other end of the forum, near the capitoline hill, stands the Arch of Septimius Severus. It was built in 203 AD to commemorate the victory over the Parthians.

Curia
The Curia was the location where the senate assembled. The rectangular brick building could seat up to two hundred senators.
The original Curia was built by the third king of Rome (although at another location). It burnt down four times, first in 80 BC but it was rebuilt each time. After a fire in 53 BC Caesar moved the Curia to the Forum Romanum. The current building was constructed in 283 AD by Diocletian. In the seventh century the Curia was turned into a church, but fortunately the building was mostly kept intact.

Rostra
The Rostra was a speaker's platform, originally built in the fourth century BC at a nearby location. The name Rostra, which means 'battering rams', was derived from the iron-clad battering rams of Volscian war vessels captured at the battle of Antium in 338 BC. The platform was decorated with many of those battering rams. The sides
As part of his modifications of the Forum, Caesar had the Rostra built at its present location, this time in marble. The podium measured twenty-four meters wide and twelve meters deep (about 80x40 ft). The Rostra had a height of three meters, so the orators on the podium stood high above the crowds.
Thanks to Spakespeare's version, the most famous speech at the Rostra was given in 44 BC by Marcus Antonius when he addressed the crowd during Julius Caesar's funeral "Friends, Romans, countrymen, lend me your ears...".

Temple of Saturn
The first Temple of Saturn was built during the last years of the Etruscan kingdom. It was inaugurated at the beginning of the republic in 497 BC. The current ruins date from 42 BC. The temple was used as the state treasury (Aerarium). It also housed the banners of the legions and the senatorial decrees.
In 20 BC a tall column, the Miliarium Aureum, was placed in front of the temple by Emperor Augustus. All distances to Rome were measured from this column.

Temple of Vespasian and Titus

Construction of this temple was started in the first century AD by Titus in honor of his deified father Vespasian.
Emperor Domitian, Titus's brother and successor, completed the structure, now dedicated to both Titus and Vespasian. The temple had a hexagonal plan with a large cella (sanctuary) with statues of the two emperors.

Temple of Castor and Pollux

Temple of
Castor & Pollux
Only three pillars remain of the Temple of Castor and Pollux. The original temple was built in 484 BC, the current ruins date from its last reconstruction in 6 AD. The temple was built by the Roman dictator Postumius who vowed to build the temple if his army would beat the Tarquin Kings who previously ruled Rome. According to the legend, Castor and Pollux, mythological twin brothers, helped the Roman army to victory and announced the victory at the forum.

Temple of Antoninus and Faustina

Temple of Antoninus
and Faustina
The Temple of Antoninus and Faustina was built in 141 AD by Emperor Antoninus Pius to honor his deceased wife Faustina. After the death of the emperor twenty years later the temple was rededicated to both Antoninus and Faustina. In the seventh century the temple was converted into the church of San Lorenzo in Miranda. The church was rebuilt in 1601.
The deep grooves in the marble columns are attributed to attempts to tear down the columns. The cords burnt into the columns, but fortunately they did not budge.

In 54 BC Julius Caesar started construction of the Basilica Julia,

Basilica Julia
a building used as the seat of the centumviri, a court of civil jurisdiction specialized in inheritance dispites. There were also several other courts where magistrates held tribunals.
The large building, 101 meters long and 49 meters wide, was destroyed by fire in 9 BC but rebuilt again seven years later. After the fall of Rome the basilica was sacked. Not much remains of it today but you can still clearly see the floor plan.

The Basilica Aemilia is the oldest basilica at the forum, 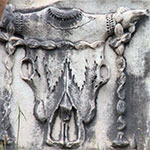 Detail of Basilica Aemilia
originally built in 179 BC by consuls Marcus Aemilius Lepidus and Marcus Fulvius Nobilor. The purpose of the basilica was to provide a sheltering place so that many of the businesses and administration that normally took place outside could be carried out here in case of bad weather. It was last modified in 22 AD; at that time the great marble hall with four aisles incorporated a number of stores that housed public banks and money exchanges (tabernae argentariae).
The Basilica was destroyed by fire during the sack of Rome by the Visigoths in 410 AD.

Temple of Vesta
The circular temple of Vesta dates back to the fourth century BC. The small temple was one of Rome's most important as it was dedicated to the protectress of both the family and State. Here the Vestal Virgins guarded the sacred eternal flame, symbol of the eternal life of Rome. The Virgins guarding the flame were chosen by the Pontifex Maximus, the supreme religious authority of the State. The girls, who had to be aristocrates, had to serve for thirty years.

Statues of Vestal Virgins
During that time they had to stay virgins, otherwise they would be buried alive (this happened to ten of them). The Vestal Virgins were highly regarded and enjoyed many perks.

House of the Vestal Virgins

Temple of Romulus
Opposite the House of the Vestal Virgins is the circular Temple of Romulus, built in the fourth century AD. The building is mostly intact due to its incorporation into the church Santi Cosma e Damiano. The large well-preserved bronze door is original. There is still a debate going on as to who this temple was dedicated to. For now it is assumed that this temple was dedicated to the son of Maxentius, who died young in 307 AD.

Construction of the last of the large basilicas was started by Emperor Maxentius in 308 AD.

Basilica of Maxentius
After his defeat by Constantine during the famous battle at the Milvian Bridge in 312 AD, the basilica was completed by Constantine.
The basilica measured 100 meters by 65 meters and was an impressive 35 meters high. It consisted of a large central nave with enormous corinthean columns and two smaller aisles. One column was moved in 1614 to the square of Santa Maria Maggiore. A twelve meter tall statue of Constantine, partly in marble and partly in wood, occupied the western end of the Basilica. Parts of the statue can now be found at the courtyard of the Palazzo dei Conservatori, part of the Capitoline Museums.

Temple of Venus and Rome

Temple of Venus and Rome
Forum Romanum, near the Colosseum. Designed by Emperor Hadrian in 135 AD, this temple measured an impressive 100 meters by 145 meters. The temple was dedicated to Roma, the personification of the city and Venus, mother of Aeneas (assumed father of Remus and Romulus). The building contained two cellae (sanctuaries) with statues of the goddesses, each located at one side of the temple. Part of the cella dedicated to Roma is still standing today.

Column of Phocas
This 13.5 meter (44 ft) tall column is the youngest of the forum. It wasn't part of any temple, but it is a monument built in honor of the Byzantine Emperor Phocas on the occasion of his visit to Rome. The Corinthian column was erected in 608 AD by the Italian exarch Smaragdus, and was crowned with a gilded statue of Phocas.

Remains of several more structures can be found on the Forum Romanum, among them the Sacellum of Venus Cloacina, the Porticus Deorum Consentium, the arch of Actium, the Regia, the Temple of Divus Julius - built by Augustus in honor of Julius Caesar - and the Temple of Concord.

From USD
$45.05
http://www.partner.viator.com/en/9347/tours/Rome/Skip-the-Line-Colosseum-Palatine-Hill-and-Roman-Forum-Official-Guided-Tour/d511-20905P4
Subway
Colosseo (B)
Location
Between the Capitol and the Colosseum
514
rome
x
Press &ltESC> to close